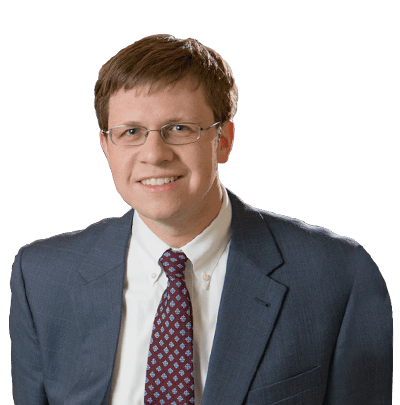 Chris represents individuals who have suffered personal injury or financial loss as a result of others’ wrongdoing or negligence. Much of his practice focuses on class actions and mass tort actions, but he also represents individual clients in contract disputes, personal injury and wrongful death cases, and copyright infringement actions. He has litigated civil actions in thirteen states and represented clients in both state and federal courts at the trial and appellate levels. Chris particularly enjoys legal research and writing. He has briefed and argued multiple appeals in the Eleventh Circuit Court of Appeals and regularly briefs key motions in trial courts around the country. A number of his cases have led to precedent-setting court decisions.

One of the highlights of Chris’ career has been representing American corn farmers. Beginning in 2015, Chris worked with a team of lawyers from Hare, Wynn, Newell & Newton and other firms in prosecuting claims on behalf of American corn farmers who suffered financial losses when a seed company’s negligence depressed the market price of corn. See In re Syngenta AG MIR162 Corn Litigation (MDL 2591). The team’s hard work paid off in June 2017 when, after a three-week trial, a Kansas jury awarded a $217.7 million verdict in favor of a class of over 7,000 Kansas corn farmers. This verdict was one of the ten largest jury verdicts in the United States in 2017. A federal court subsequently approved a $1.51 billion global settlement benefiting American corn farmers.

Chris is active in bar activities. He is a member of the Alabama Association for Justice, where he serves on the journal committee and the amicus committee. He has published articles on various topics related to complex litigation that have appeared in the Alabama Lawyer, Alabama Association for Justice Journal, Kentucky Justice Association Advocate, and Defense Counsel Journal. He was also a member of the Birmingham Bar Association’s 2016 Future Leaders Forum. Active in the community as well, Chris was a member of the National Multiple Sclerosis Society’s Birmingham MS Leaders Challenge Class of 2019 and has served on the junior board of the Horizons School of Birmingham.

Chris grew up in Calhoun County, Alabama, and is a graduate of Vanderbilt University and Harvard Law School. Before entering private practice, Chris clerked for Honorable William H. Pryor Jr. of the United States Court of Appeals for the Eleventh Circuit. He then worked for a large Birmingham firm where he focused on complex and appellate litigation before joining Hare, Wynn, Newell & Newton in early 2015.

Outside of work, Chris enjoys spending time with his family and friends, attending college football games, kayaking, and hiking.

Chris was part of the team of lawyers from Hare, Wynn, Newell & Newton LLP and other firms that represented corn farmers in litigation against Swiss agribusiness company Syngenta. In this multi-district litigation, Chris had the rare opportunity to serve on the trial team for a class action trial. After a three-week trial in 2017, a jury awarded $217.7 million to a class of over 7,000 Kansas corn farmers. A $1.51 billion global settlement benefiting a nationwide class of corn farmers later received court approval.

Representing the survivors of a service member killed in an airplane crash, Chris successfully argued, in a case of first impression in the Eleventh Circuit, that appellate jurisdiction was lacking over a district court’s denial of a motion to dismiss the action under the political question doctrine.

Chris helped litigate a shareholder derivative suit in the Delaware Court of Chancery that resulted in a $27 million settlement.

As court-appointed appellate counsel, Chris, following briefing and oral argument in the Eleventh Circuit, obtained reversal of a summary judgment entered against a habeas petitioner.

Chris litigated a multi-million dollar commercial dispute in related proceedings in Indiana and Tennessee, obtaining summary judgment in favor of his client.

Chris helped litigate a case that presented a question of first impression over the calculation of the amount in controversy in a federal petition to compel arbitration.