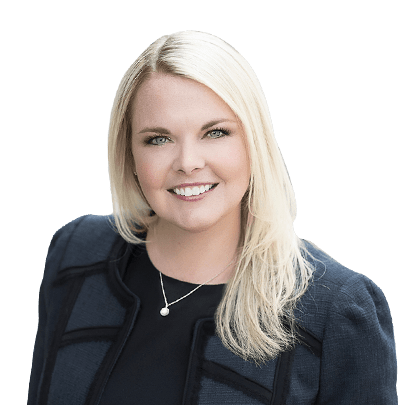 Ashley’s practice is concentrated in the areas of medical malpractice and she has a particular interest in birth trauma litigation. Ashley considers it an honor to stand up healthcare providers, big corporations, and insurance companies. She loves being able to be an advocate and a voice for families and children who have been victims of medical negligence.

She has had many multimillion-dollar verdicts and settlements. Her first jury trial resulted in a $15 million verdict against a gas station that sold alcohol to minors without checking for identification. Ashley argued that case in front of The Alabama Supreme Court, where the verdict was affirmed, making it the largest damages judgment affirmed in 20 years.

Outside of the courtroom, Ashley is an Adjunct Professor at Cumberland School of Law where she teaches Trial Advocacy. Ashley has coached the Hoover High School Trial Team and HASS trial teams. She has taught public speaking and critical thinking skills at Restoration Academy, a school for at-risk, inner-city children. She loves being a mom to her six-year-old daughter, Charlotte.

Ashley received her postgraduate degree from the Cumberland School of Law, where she was active in the trial advocacy program. She was a member of Cumberland’s National Trial Team, and for two years in a row, brought home the trophy in the Texas Young Lawyers Association’s National Trial Competition. She also received the James H. Roberts “Best Advocate” Award.

Ashley’s first jury trial resulted in a $15 million verdict against a gas station that sold alcohol to minors without checking for identification. Ashley argued this case in front of The Alabama Supreme Court, where the verdict was affirmed, making it the largest damages judgment in 20 years. Recently, Ashley was part of the Hare, Wynn, Newell & Newton trial team in a medical malpractice case in Jefferson County, Alabama, in which the jury awarded a $7.5 million verdict against Brookwood Hospital in a negligence lawsuit. In August of 2014, she was a key member of the Hare, Wynn, Newell & Newton trial team in another medical malpractice suit in Walker County, Alabama, in which the plaintiff was awarded a jury verdict of $4 million. Ashley has settled numerous cases for over $1 million.

Ashley is a member of the Leadership Alabama Initiative. She served on the executive committee and as President of the Alabama Association for Justice Emerging Leaders Board and is a member of Class 5 of the Birmingham Bar Association Future Leaders Forum, where she serves as co-chair on the 2016 committee. She was selected to join Class 12 of The Alabama State Bar Leadership Forum and accepted into the Birmingham Inn of Court group. In addition, Ashley is on the board of the Birmingham Bar Foundation.

Do You Have a Potential Claim for a Birth Injury in Birmingham, Alabama?