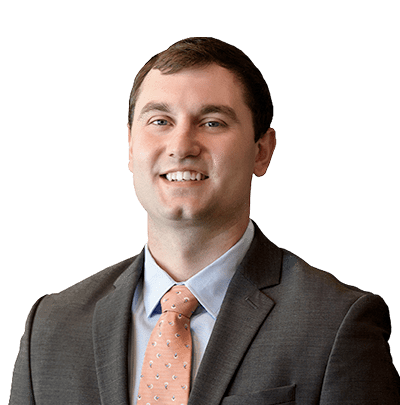 The newest trial lawyer at Hare, Wynn, Newell & Newton is driven by a very personal story. Jonathan’s mother was a plaintiff in a class-action lawsuit against a pharmaceutical manufacturer after sustaining injuries that could have resulted in her having less time to spend with her children and grandchildren. That story serves as a daily reminder to Jonathan. He realizes that he doesn’t just serve clients. He never forgets that his clients are really mothers, fathers, children, and grandchildren–and they need a strong advocate to help them achieve the justice they deserve. He realizes the work he does can make a tremendous difference in their lives and he works hard every day to honor the trust they put in him.

A lifelong resident of Kentucky, Jonathan Fannin understands and respects his fellow Kentuckians. He works to ease their fears by creating a road map of their case so that they can feel more comfortable with the process.

Jonathan met his wife, Meredith, in law school where the two were classmates. In March of 2020, they welcomed their first child, Jack. When he is not working, Jonathan can usually be found in the kitchen or in front of the grill, cooking for family and friends. He also enjoys golfing and riverbank fishing in his spare time.

In 2019, Jonathan was named “Top 40 Under 40” by the National Trial Lawyers. This honor is given to the top trial lawyers under the age of 40 that practice civil plaintiff and/or criminal defense law and demonstrate superior qualifications of leadership and influence.

Jonathan’s career began with the Supreme Court of Kentucky, where he served as a law clerk to the Honorable Justice Daniel J. Venters. As a law clerk to Justice Venters, one of Jonathan’s favorite responsibilities was attending conferences wherein the justices discussed cases that shaped the future of Kentucky jurisprudence. He also enjoyed the privilege of working closely with Justice Venters to transform those discussions into opinions. Jonathan’s experience with the Commonwealth’s highest court further ignited his passion for the law, as well as his drive to become the most knowledgeable and capable attorney he could be. Jonathan has also worked as a Small Claims Mediator for the Fayette District Court.

Common Questions From Passengers After a Car Accident in Alabama